St Thomas Becket: patron of the pastoral clergy of England and Wales 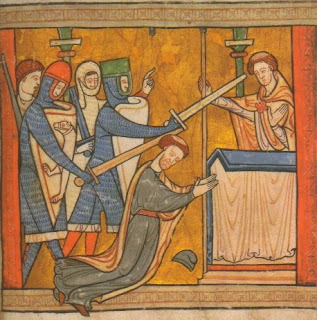 In the ordinary form of the Roman Liturgy, the days following Christmas Day see the celebration of the Feasts of St Stephen, Saint John (or the Holy Family - I had reason to celebrate St John, as I went to a Mass celebrated by the Community of St John for their patronal feast on Sunday) and the Holy Innocents. The following days are those of the Octave of Christmas.

It is with the benefit of hindsight, as this only occurred to me this morning, but perhaps you could pray a Holy Hour for your parish priests at some point today? Before the Blessed Sacrament, if possible, or at home if that isn't possible?

Go here, and follow the links therein (the Catholic Encyclopaedia article is perhaps the easiest read), to learn something of the story of St Thomas Becket.

UPDATE: Stella Maris indicates (Becket, Peter and the Church) an aspect of St Thomas life - his teaching with regard to the office of Peter in the universal Church. This is, I suspect, the underlying principle behind St Thomas resistance to the incursions of Henry II with regard to the rights of the Church in England, that is not necessarily apparent in the purely historical narrative. It is also worthwhile to follow the link from the first comment at that post to read an Anglo-Catholic commentary on the feast day: St Thomas Becket: the struggle between Church and State.

[Reading about the conflict between the King, Henry II, and Archbishop Becket over the rights of the Church in relation to the secular power raises an interesting question for today. In so far as I have understood the story, the key point was the Council of Clarendon in 1164 and the provisions insisted on then by the King. We live now in a time when the separation of the state power from religious authority is taken for granted, what Pope Benedict would see as an "appropriate secularity"; but, in the times of St Thomas, the power of state and the exercise of ecclesial jurisdiction overlapped. As a deacon, for example, St Thomas was chancellor, one of the highest positions of state. One provision of the Council limited excommunications by a need for royal permission in certain cases; another insisted that clerics convicted and sentenced in ecclesiastical courts should also be subject to possible punishment by state authorities (remembering that, in those times, a penalty imposed by an ecclesiastical court could be a material penalty and not just a spiritual one; the ecclesiastical penalty overlapped to become one that we today could consider as a state punishment). In the context of contemporary child abuse scandals, particularly in Ireland, it is interesting to see that the principle that offences committed by ecclesiastics should be the subject of the due processes of state law is now central to the Catholic Church's response to those scandals. Today, though, the ecclesial/legal significance of that principle, which appears as being strongly opposed by St Thomas, is rather the opposite than it would have been in 1164. Nowadays ecclesiastical penalty - if it had been applied in the cases of child abuse, which it appears not to have been - would lack the material penalty that it would have included in 1164. That ecclesiastics are also subject to the processes of state law restores that material penalty.]
Posted by Joe at 13:28