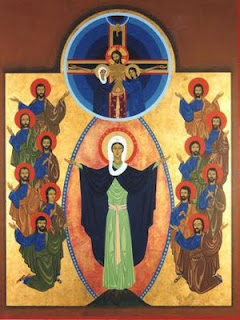 From the rubrical point of view, it is a moot point as to whether or not a parish should use the Masses allocated to the Advent Season on the Saturdays of Advent. A parish where the Saturday Masses are habitually used during Ordinary Time would, I expect, be within the intended spirit of the Collection to use the Masses for Advent. The Prefaces, in particular, are very rich Liturgically and catechetically. The one below is from the first Mass in the Collection, that of Mary, Chosen Daughter of Israel.


You chose the Blessed Virgin Mary
as the crown of Israel and the beginning of the Church,
to reveal to all peoples
that salvation is born from Israel
and that your new family springs from a chosen root.

She is by nature the daughter of Adam,
who by her sinlessness undid the sin of Eve.
She is by faith the true child of Abraham,
who first believed and so conceived.
She is by descent the branch from the root of Jesse,
bearing the flower that is Jesus Christ our Lord.

I am very grateful for this post. I am about to celebrate the First Saturday Mass in an hour or so, and I have never had the courage to use the Advent texts for Our Lady. Your post has encouraged me to do just that.