All the Cathedrals (10): St Albans

Zero and I visited St Albans recently, to tick off another of England's cathedrals.

The Cathedral website has a highlights page here. The story of the martyrdom of St Alban is here. Other aspects of the history of the Abbey/Cathedral can be found on links from those pages.

Visiting the Cathedral today, there is no readily visible evidence of the different vicissitudes that have been suffered by the building over the centuries. There is no evidence, at least not that we saw, of the Anglo-Saxon church or medieval church that might typically have existed before the construction of the Norman church (if I understand correctly, any such structures were not on the same site but nearby, and the construction of the Norman church was undertaken to take advantage of the top of the hill on which the Cathedral now exists). Neither is there any evidence (unless you look closely, and then there are only clues arising from the later restoration of the Cathedral) of the destruction and decay of the Church building that occurred after the dissolution of the monastery by Henry VIII's commissioner. All the statues in the Cathedral today, for example, date from 19th and 20th century restoration work, as does the stained glass. St Albans changed hands several times during the Civil War, with Parliament finally holding it. The Cathedral was then used to hold prisoners of war, the consequent damage from which is also no longer evident.

The Cathedral does have some lovely elements, such as the reredos behind the high altar and the Lady Chapel behind the sanctuary at the east end. 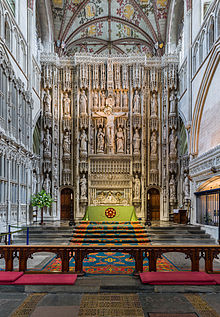 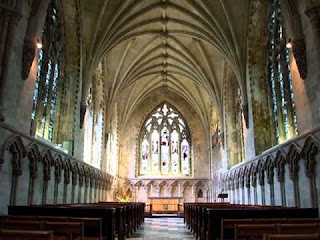 There are also the statues of Christian martyrs in the reredos behind the nave altar. St Alban and the priest who he protected are accompanied, among others, by Dietrich Bonhoeffer, Oscar Romero and one of the Protestant martyrs who suffered during the reign of Mary. This does not leave a uniformly satisfactory impression - I could not quite decide whether I should recognise it as genuine effort at ecumenical understanding or a manifestation, with the best of intentions, of a degree of religious indifferentism. One might also wonder about it as an example of cultural appropriation in a religious context …. 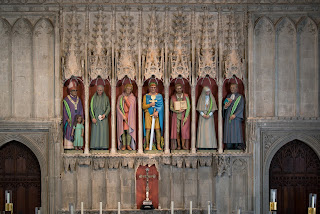 I also found that the building as a whole left an incoherent impression. Individual elements just seemed to exist with no relation to others - mediaeval wall paintings on the pillars on one side of the nave with decorated pillars on the opposite side that replaced previously collapsed pillars, but with no effort to match the two sides at all. Plaster over Roman brick in the transepts reflects the original construction of the Cathedral, but does not convey any majesty.

All in all, given that it is a Church dedicated to the first Christian martyr of England (and the restored shrine does contain a relic of St Alban) I found it a disappointment.
Posted by Joe at 19:45 No comments:

Labels: all the cathedrals, martyrs

Auntie Joanna's Adoremus Diary: a glorious celebration of the Eucharist


More? Of course there was more. A pleasant meal with family and friends. Nightfever at the Blessed Sacrament shrine, packed with people, glittering with candles. Liverpool streets filled with Saturday night revellers, girls on hen nights, much shrieking and shouting. And some of them – many of them, the most unlikely of them – came in to pray, invited by the young congress teams.

As I post, the Eucharist is being carried in procession through the streets of Liverpool.
Posted by Joe at 14:26 No comments:

...but the world needs it desperately.

I link to this article in connection with the National Eucharistic Congress and Pilgrimage taking place in Liverpool today.

Coverage, with video clips that you can watch, here: https://www.shalomworldtv.org/adoremus

This coming weekend sees the National Eucharistic Congress for England and Wales, being held in Liverpool: Adoremus.

Coverage of the Congress can be found here: http://www.shalomworldtv.org/adoremus.


You can also watch it on the homepages of these websites:
http://catholicnews.org.uk
http://cbcew.org.uk

The Eucharistic procession through the streets of Liverpool on Sunday will remind me of my own participation in similar processions (I often happen to be away on holiday at the time of the Solemnity of Corpus Christi, so get the opportunity to participate in processions  in different places):

The parish of Rivotorto, near to Assisi (twice).

Lisieux, at the Basilica dedicated to St Therese.

Do not use harmful words in talking. Use only helpful words, the kind that build up and provide what is needed, so that what you say will do good to those who hear you. And do not make God's Holy Spirit sad; for the Spirit is God's mark of ownership over you, a guarantee that the Day will come when God will set you free. Get rid of all bitterness, passion, and anger. No more shouting or insults. No more hateful feelings of any sort. Instead, be kind and tender-hearted to one another, and forgive one another, as God has forgiven you in Christ.