International Eucharistic Congress: the Procession of the Blessed Sacrament

On Thursday evening of the week of the Congress, a procession with the Blessed Sacrament took place. This began at the venue of the main Congress activities, a conference/exhibition centre about 4 km from the centre of Quebec City (think perhaps of something like G-MEX in Manchester or the Earl's Court in London). It then walked 5.3 km into the centre of Quebec, finishing in an outdoor auditorium in the docks area of Quebec. (Quebec's docks have undergone, on a rather smaller scale, the sort of renewal that has taken place in London's docklands, with entertainment venues and a marina.)

We did cheat a bit, and walked ahead to join the procession as it reached its first "stop" at the Church of St Francis. 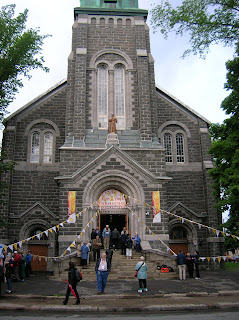 This enabled me to take the following photograph as the Blessed Sacrament arrived outside the Church. 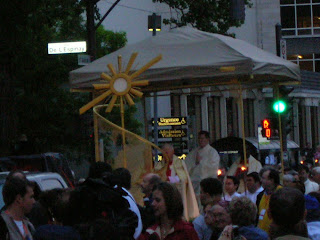 This was an event for which the 10 000 or so Congress participants were joined by many others from Quebec City and the surrounding area. The total number of people joining the procession "easily passed 20 000" according to one newspaper report, and was put at 25 000 during the sessions of the Congress on the following day. One view of the crowds is shown below. 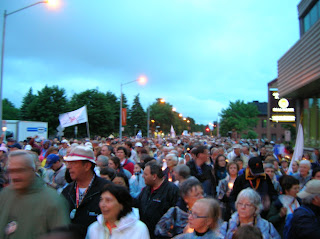 One of the official ECDQ.tv photographs: 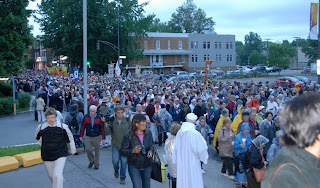 The media coverage in Quebec City the following day was not very sympathetic. One newspaper I saw commented that it was "mostly older people" - I don't know where they got that from, as there was a good cross-section of ages taking part so far as I could see. The same newspaper also commented on the fact that, despite the Church in Quebec always saying it wanted to be "of our times", its old fashioned hierarchical structures were shown again by the ordering of priests, bishops, cardinals and religious in places of precedence in the procession. The fact that the Eucharist itself and three lead clergy travelled on a float also drew adverse comment, even though the report recognised that Cardinal Marc Ouellet travelled most of the way on his knees in adoration: "they did not walk in the streets". But, as I recall reading somewhere, when the Church is mocked, is that when she is being most true to herself?

The majority of those in the procession had to remain at the second "stop". As the procession entered the narrow streets of the centre of Quebec City there just was not room for them all. And only a relatively small number were able to complete the last stage to the "Agora" in the docks.

This was a public expression of Catholic faith in Jesus presence in the Eucharist of which I am proud to have been able to be a part!

As the procession made its way through the streets of Quebec, people stood on the balconies or steps of their houses (many of the houses and flats in Quebec have a balcony in front of them, or steps outside leading up to the balconies/landings on upper floors)to watch it go by.

On one particular balcony, there were two young children with their Dad, wrapped up in their dressing gowns. They were sat with their "Eucharistic Congress" candles burning. They had clearly been allowed to stay up late to watch (really, to take part in) the procession from their balcony. Quite moving.

I wish however that there had been public address with prayers/hymns being led as many in the procession were just chatting. It is always a shame to see that the priests are often the worst culprits.

There was a radio broadcast from Radio Galilee that participants in the procession could listen to on their FM radio/earpiece provided to Congress participants with their welcome pack, with some songs and readings from John Paul II - this was one way of participating in a more prayerful way (but the automatic scanning of the radio kept slipping onto a nearby frequency). At early points in the procession, there were hand pulled trolleys with speakers broadcasting this radio coverage - but they were not very effective.

Many were just chatting, as you say, and perhaps more could have been done to achieve prayerful participation.

In Lourdes, I tend to take part in the processions by watching from the side rather than by walking - I find it is a way of being more prayerful.

Aren't you pleased you actually walked the Procession instead of being on the sidelines like Lourdes?

Radio Galilee ? wow. That must have been some transmitter.