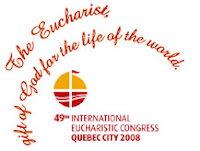 I have come across this post that summarizes much of what happened in Quebec for the International Eucharistic Congress. As well as summarising the events, and offering brief comments, the poster has included links to texts such as homilies so that you can go and read the originals. Recommended for a visit.

The post includes the following explanation of the concept of the Statio Orbis Mass at the conclusion of the Eucharistic Congress:
What Is a "Statio Orbis" Mass?
The term "Statio Orbis" came into being at the concluding celebration of the 37th Eucharistic Congress held in Munich 1960. Since then, the concluding celebration of Eucharistic Congresses has had particular Churches from various parts of the world join in communion with the Pope or one of his Legates, called a "Statio Orbis" Mass.
The word "Statio" means "station," as in "station days" in Tertullian's De Oratione. Because Wednesday and Friday, as "station days," were characterized by watchings and processions, when the faithful remained standing, the word "statio" eventually came to mean the place where the faithful walked in procession and stood for the celebration of the liturgy. The churches to which they went came to be known as "stationes" and the route to them became known as the "statio ad" (station to, meaning the procession route to) that place. Station days of that kind were once held in Rome, Constantinople and Jerusalem. Records that remain today give us the most information about such processions in Rome. Going to the "statio" was a major ceremony at one time, in which people carried all of the papal vessels used for the celebration of the Eucharist to a pilgrimage site or station church. The concept may be somewhat familiar today from the station churches of Rome during Lent.
The word "Orbis" means "circle," "ring" or "orb." In ancient Latin documents, it referred to the world. In the phrase "statio orbis," it refers to the global nature of the gathering for the papal closing Mass of each Congress.
There is more information in an interview with Archbishop Piero Marini in the EWTN library, which specifically mentions the Statio Orbis Masses, and an article in the Catholic Encyclopedia, which talks about the history of station days and the word "statio". Catholic Culture also has an article about the past and present practice of station churches.
Posted by Joe at 17:26