I could sub-title this post as "A reflection on monastic life and lay life". 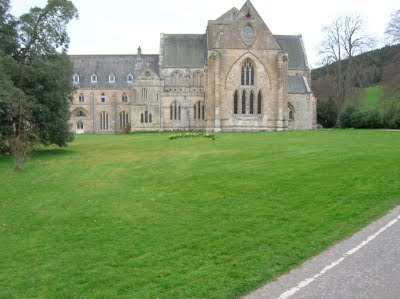 First of all, Mother Maria-Michael's latest reflection at St Walburga's Abbey. This is entitled Hearken to God's Voice. Though it is is addressed firstly to her own monastic community, it nevertheless has a very ready application to the lay person engaged in the activity of the world. Our silence is not as much the literal, physical silence that pertains within the life of a monastery (though there is no reason why we should not seek such times of physical silence, perhaps in a time of prayer or Adoration). But it is still a part of our Christian life to have the attentiveness towards God that is the meaning of silence, and gives to that silence an Advent character. We are more likely to suffer the effects of a physcial iPod than a monastic one!

That reflections addressed to a monastic community have a relevance to those who live the Christian life outside of a monastery should not come as a surprise. In the 1950s, Louis Bouyer wrote a book entitled The Meaning of the Monastic Life. At the end of his first chapter, and the beginning of his second, he summarises the meaning/purpose (the French word "sens" conveys both implications together in one word) of the life of the monk as follows:


To be a monk, then, is simply to be an integral Christian. And regarded in that light, the Christian himself is simply the man restored by the Word of the Gospel to the vocation whichthe creative Word destined for him: to respond to the Word of Agape by the word of faith, in order eventually to meet God face to face....

...the monastic vocation is simply a call to the most perfect and direct realisation possible of the vocation of man in general and Christians in particular ..


I have just started reading a book which might offer some insight into this understanding of monastic life in relation to life in the lay state. Henri Nouwen is a name I have known for some time, perhaps most noticing that he spent the later part of his life as a member of a L'Arche Community in Toronto. Before then, as a rather energetic and busy academic, he took seven months out to live the life of a Trappist monk. Very unusually, a monastery accepted him to live their life for a temporary period. Henri Nouwen's notes/diary of this seven month period were published as The Genesee Diary.

After one week in the monastery, Henri Nouwen wrote the following about work, in the light of his experiences helping in the monastery's bakery and in physical labour. The italics added are mine.


I'd better start thinking a little more about my attitude toward work. If I have learned anything this week, it is that there is a contemplative way of working that is more important for me than praying, reading or singing. Most people think that you go to a monastery to pray. Well, I prayed more this week than before but also discovered that I have not learned yet to make the work of my hands into a prayer.


Now, if that isn't a thought from a monastery with a relevance to the life of the lay person, I don't know what is!
Posted by Joe at 10:07