Pope Benedict XVI: On the Feast of Christ's birth 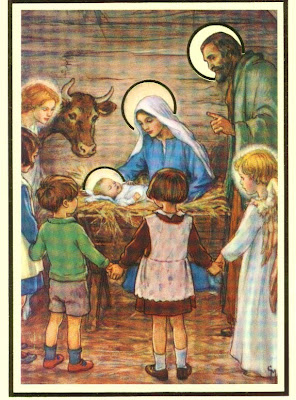 Pope Benedict devoted his address at the General Audience this week to a reflection "on the Feast of Christ's birth". The full text can be found here, at the ZENIT website. It is classic Pope Benedict, combining an analysis that is academic in nature with a profoundly pastoral presentation. You do need to read the whole to fully appreciate it, but here are four extracts.

After observing that the first feast to be celebrated in the Christian Church was that of Easter, Pope Benedict then goes on to describe the origins of the celebration of Christmas:


The first one to clearly affirm that Jesus was born on Dec. 25 was Hippolytus of Rome in his commentary on the Book of the prophet Daniel, written around 204. One exegete observes, moreover, that on this day was celebrated the Dedication of the Temple of Jerusalem, instituted by Judas Maccabeus in 164 B.C.. The concurrence of dates would come to mean that with Jesus, appearing as light of God in the night, advent of God to this earth, the consecration of the temple is truly fulfilled.


In the context of inter-religious dialogue, this is to suggest that the Christian feast of Christmas is the fulfilment of the Jewish feast of Hanukkah. It could also be read in a Marian context - the Virgin Mary being seen as the Temple of the Lord, consecrated to bring Him to birth.


Within Christianity, the feast of Christmas took on a definite form in the fourth century, when it took the place of the Roman feast of "sol invictus," the invincible sun. Thus was shown that the birth of Christ is the victory of true light over the darkness of evil and sin. Yet, the unique and intense spiritual atmosphere that surrounds Christmas developed in the Middle Ages, thanks to St. Francis of Assisi, who was profoundly in love with Jesus as man, with God-with-us.


Pope Benedict then continues with an account of how St Francis began the custom of the nativity scene, quoting from St Francis' biographer Thomas of Celano and then commenting:


These lines describe very well how Francis' living faith in and love for the humanity of Christ have been transmitted to the Christian feast of Christmas: the discovery that God reveals himself in the tiny fingers of the Child Jesus. Thanks to St. Francis, the Christian people have been able to perceive that at Christmas, God truly has become Emmanuel, God-with-us, from whom no barrier or distance can separate us. In this Child, God has come so near to each one of us, so close, that we can address him with confidence and maintain with him a trusting relationship of deep affection, as we do with a newborn.


Again, Pope Benedict's words have a significance in the context of inter-religious dialogue. For a Christian, God is someone who has come close to us and who invites us to closeness, intimacy with him. For a Jewish person, this closeness is a possibility expressed in God's election of his people, but it is a possibility that is still looking for fulfilment - the Messiah is still awaited. For a person who is a Muslim, this manifestation of God in human existence is unimaginable.

In this Child, in fact, God-Love is manifested: God comes without weapons, without strength, because he does not aim to conquer, we could say, from without, but rather wants to be welcomed by man in liberty. God becomes a defenseless Child to conquer man's pride, violence and desire to possess. In Jesus, God took up this poor and defenseless condition to conquer with love and lead us to our true identity. We should not forget that the greatest title of Jesus Christ is precisely that of "Son," Son of God. Divine dignity is indicated with a term that makes reference to the humble condition of the manger in Bethlehem, though corresponding uniquely to his divinity, which is the divinity of the "Son."


In the developed nations of Europe and North America, the crib or nativity scene has become profoundly symbolic. Civil authorities are now reluctant to arrange nativity displays; some schools have abandoned their nativity plays. The reasons given for this are that such displays might give offence to those who follow religions other than Christianity; the reality seems to me to be pressure from those of no religious belief to exclude expressions of religious belief from the public arena.

So let us display our nativity scenes with confidence, and for the evangelisation of our society.
Posted by Joe at 14:11