The Second Vatican Council has this to say about conscientious objection and military service, in its constitution Gaudium et Spes. The translation is that from the Vatican website:


..it seems right that laws make humane provisions for the case of those who for reasons of conscience refuse to bear arms, provided however, that they agree to serve the human community in some other way.

Certainly, war has not been rooted out of human affairs. As long as the danger of war remains and there is no competent and sufficiently powerful authority at the international level, governments cannot be denied the right to legitimate defense once every means of peaceful settlement has been exhausted...

Those too who devote themselves to the military service of their country should regard themselves as the agents of security and freedom of peoples. As long as they fulfill this role properly, they are making a genuine contribution to the establishment of peace. 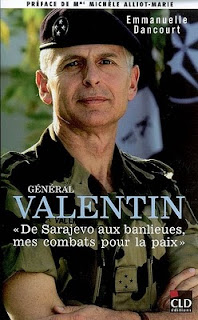 I am just finishing reading a book about French general Marcel Valentin;the English translation of its title is: Marcel Valentin: from Sarajevo to to the suburbs, my struggles for peace. In 1993, as a colonel, Marcel Valentin commanded the UN forces in Sarajevo. He also commanded the Force of Extraction in Macedonia in 1999 - thereby becoming the first French officer to hold a comand in a NATO operation since General De Gaulle had withdrawn France from NATO's military command structure in the 1960's. This force was tasked to step in and rescue UN observers in Kosovo should the need have arisen (a lesson had been learnt after the taking hostage of UN observers in Bosnia). As it happened, the UN observers withdrew ahead of the NATO aerial campaign against Serbia. The extraction force then became the forerunner of KFOR, the NATO force that acted on the ground to restore normality in Kosovo after the Serbian withdrawal. In 2001, General Valentin returned to the region as head of KFOR, a position that he held for a year. Before retiring from the army in 2005, General Valentin initiated programmes to build positive relations between the military and the civilian population of France. In retirement, he has worked in promoting the good of young people at the margins of society.

One of the most interesting aspects of this book is its account of how the nature of the military calling has changed over time. Now, the soldier needs to be much more aware of the social and political aspects of their engagement. This article, written soon after General Valentin's retirement from the army reflects some of the themes in the book. The other aspect is that, in General Valentin, one can see someone who has lived out what Vatican II's constitution says about the soldier as being an agent of peace.

The book takes the form of a book length interview between a journalist of the French Catholic TV station KTO and Marcel Valentin. Emanuelle Dancourt first interviewed General Valentin for her series « V.I.P. » Visages Inattendus de Personnalités, and it was this encounter that prompted her to find out more about him. Unfortunately, her interview with General Valentin is not on-line.

More recently, for the 150th anniversary of the apparitions in Lourdes, one of the 12 missions identified for particular celebration during the year was that of the Church in favour of peace. This was particularly marked by the International Military Pilgrimage (personal note: from family 35 mm films that I remember from my childhood, I think my father took part in this pilgrimage, possibly in its first year in 1958). In the book Lourdes for Today and Tomorrow, it was General Valentin who wrote the "personal experience" that accompanied the presentation of this mission.


Allowing a fomer solider to speak about peace to mark the Jubilee anniversary of Lourdes, is evidence to me of how much more today soldiers are associated with peace keeping.