A synagogue carries the Torah scroll in public procession 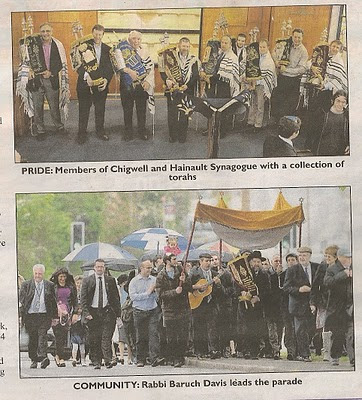 The photographs above appeared in some editions of the Recorder groups local newspapers covering East London this week.

A Synagogue congregation paid tribute to its community as it paraded a new scroll around neighbourhood streets.

Members of the Chigwell and Hainault Synagogue .. completed the Sefer Torah - scroll of the law - in time for the festival of Shavuot, which marks the time when [the] Jewish people were given the Torah on Mount Sinai, after their Exodus from Egypt.

Worshipper Alex Stuart came up with the idea for a scroll donated by the synagogue's community and spearheaded a fundraising campaign. A specially trained scribe, known as a "sofer", completed the work at the home of Rabbi Baruch Davis. The congregation took it in turns to help inscribe the final letters of the scroll ...

The Torah was carried under a chupah, or canopy, through the rain soaked streets of Chigwell, while worshippers sang, danced and played music.

The crowd were joined by guests [the local MP and Deputy Mayor], and waited outside the synagogue while other Torah scrolls were brought out to "welcome" the new addition.

Now, how about that Eucharistic Procession for the forthcoming Solemnity of the Body and Blood of the Lord?

Many thanks for the link Evangelista. They certainly are a reminder of the faith in these isles in happier days.