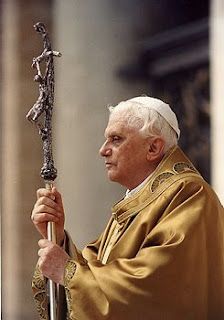 I have not followed Pope Benedict's visit to Portugal very closely, due to demands of work - and the distraction of UK politics (will the coalition stick?).

What caught the news media attention more than anything else were Pope Benedict's remarks about the abuse crisis during a press conference with journalists on the flight from Rome to Portugal. The BBC news report is here.


Today we see in a truly terrifying way that the greatest persecution of the Church does not come from outside enemies, but is born of sin within the Church," the pontiff told reporters on a plane bound for Portugal.

Pope Benedict also referred again to the need for the Church to do penance in reparation, a call that has been taken up by, among others, the Bishops Conference of England and Wales.

In an interview on his way to Portugal, Pope Benedict said:


The dialectic between secularism and faith in Portugal has a long history. Already in the eighteenth century the presence of the Enlightenment was strongly felt: we need only think of the name Pombal. So we can see that in these last centuries Portugal has always been living in a dialectic, which nowadays has naturally become more radical and appears with all the marks of the contemporary European spirit. This strikes me both as a challenge and a great opportunity. In these centuries of a dialectic between enlightenment, secularism and faith, there were always individuals who sought to build bridges and create a dialogue, but unfortunately the prevailing tendency was one of opposition and mutual exclusion. Today we see that this very dialectic represents an opportunity and that we need to develop a synthesis and a forward-looking and profound dialogue. In the multicultural situation in which we all find ourselves, we see that if European culture were merely rationalist, it would lack a transcendent religious dimension, and not be able to enter into dialogue with the great cultures of humanity all of which have this transcendent religious dimension – which is a dimension of man himself. So to think that there exists a pure, anti-historical reason, solely self-existent, which is “reason” itself, is a mistake; we are finding more and more that it affects only part of man, it expresses a certain historical situation but it is not reason as such. Reason as such is open to transcendence and only in the encounter between transcendent reality and faith and reason does man find himself. So I think that the precise task and mission of Europe in this situation is to create this dialogue, to integrate faith and modern rationality in a single anthropological vision which approaches the human being as a whole and thus also makes human cultures communicable. So I would say that the presence of secularism is something normal, but the separation and the opposition between secularism and a culture of faith is something anomalous and must be transcended. The great challenge of the present moment is for the two to come together, and in this way to discover their true identity. This, as I have said, is Europe’s mission and mankind’s need in our history.

This perspective was reflected in Pope Benedict's address as he arrived in Lisbon, and again in his address on returning to Rome. The following paragraphs from the first of these addresses shows how Pope Benedict combined a clear and explicit account of the Catholic faith with an invitation to those who do not share that faith to enter into dialogue with it, offering at the same time an indication of the lines along which that dialogue might take place. I have added italics to emphasise the key points in Pope Benedict's argument, and to draw out how they extend the invitation to dialogue - indeed the address is itself an exercise in such a dialogue.


The Virgin Mary came from heaven to remind us of Gospel truths that constitute for humanity – so lacking in love and without hope for salvation – the source of hope. To be sure, this hope has as its primary and radical dimension not the horizontal relation, but the vertical and transcendental one. The relationship with God is constitutive of the human being, who was created and ordered towards God; he seeks truth by means of his cognitive processes, he tends towards the good in the sphere of volition, and he is attracted by beauty in the aesthetic dimension. Consciousness is Christian to the degree to which it opens itself to the fullness of life and wisdom that we find in Jesus Christ. The visit that I am now beginning under the sign of hope is intended as a proposal of wisdom and mission.

From a wise vision of life and of the world, the just ordering of society follows. Situated within history, the Church is open to cooperating with anyone who does not marginalize or reduce to the private sphere the essential consideration of the human meaning of life. The point at issue is not an ethical confrontation between a secular and a religious system, so much as a question about the meaning that we give to our freedom. What matters is the value attributed to the problem of meaning and its implication in public life. By separating Church and State, the Republican revolution which took place 100 years ago in Portugal, opened up a new area of freedom for the Church, to which the two concordats of 1940 and 2004 would give shape, in cultural settings and ecclesial perspectives profoundly marked by rapid change. For the most part, the sufferings caused by these transformations have been faced with courage. Living amid a plurality of value systems and ethical outlooks requires a journey to the core of one’s being and to the nucleus of Christianity so as to reinforce the quality of one’s witness to the point of sanctity, and to find mission paths that lead even to the radical choice of martyrdom.

What is interesting about this visit is that, made in the context of a dialogue with a society characterised by both profound religious faith and secularisation, it was by all reports a visit that exceeded expectations - see also this report, which suggests that Pope Benedict was warmly greeted by crowds in the streets of Lisbon. The BBC website has a slideshow from the Mass celebrated at the shrine in Fatima, which shows a large participation by the faithful. The Vatican website's Portugal visit mini-site, with the texts of all Pope Benedict's addresses during the visit, can be found here.

The theme of dialogue and service to truth was more fully developed in the address that Pope Benedict gave during a meeting with representatives of the world of Portuguese culture. This address is well worth reading in its entirety - it isn't long but has typically Benedictine density. It develops a theme of truth in the context of the role of the Church in a society that has a largely Christian heritage, and in the context of a culture which does not profess a specific religious belief. It is an exposition of how Pope Benedict understands the notion of dialogue.


Dear friends, the Church considers that her most important mission in today’s culture is to keep alive the search for truth, and consequently for God; to bring people to look beyond penultimate realities and to seek those that are ultimate. I invite you to deepen your knowledge of God as he has revealed himself in Jesus Christ for our complete fulfilment. Produce beautiful things, but above all make your lives places of beauty. May Our Lady of Belém intercede for you, she who has been venerated down through the centuries by navigators, and is venerated today by the navigators of Goodness, Truth and Beauty.

We can see from this visit some indicators for how Pope Benedict might approach his visit to Britain in September - and also signs of hope that it, too, will exceed expectations.
PS. I hope to post soon about Pope Benedict's thoughts on Fatima.

UPDATE:  A more detailed analysis of Pope Benedict's visit, that picks up several of the themes referred to above, can be found at Wheat and Weeds: Potpourri of Popery, Catholic Sundance Edition. I was rather taken by the irreverance of the title of this post, but the content is first rate.
Posted by Joe at 09:00

I, too, think that the Holy Father's visit to Britain will exceed expectations IF our bishops allow it to. I recall the visit of the relics of St Therese last year! What is worrying is talk of restricting events like the mass at Coventry airport to ticket holders only.

Hope I didn't offend. I can't think of Fatima w/o thinking of a kid's video, "The Day the Sun Danced." Intended to explain myself in the post but forgot.
Thanks for the link and the kind words.

I haven't had any complaints, and a certain holy irreverance doesn't do any harm, at least not so far as I can see.