Are you sitting comfortably? (Or, a story about the meaning of life)

They started from Newbury Park Station on the Central Line, where a serious discussion was held about midwife's parking. Herewith a previous example: 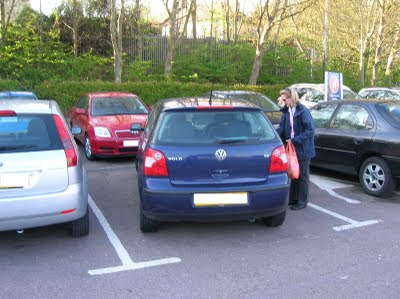 On the way, they realised they had time to tour the West End before dining, so visited Trafalgar Square to see One and Other: where this lady had just been deposited atop the fourth plinth. She can be seen here being admired by, from left to right, midwife, physics teacher (2) and English teacher (advisory): 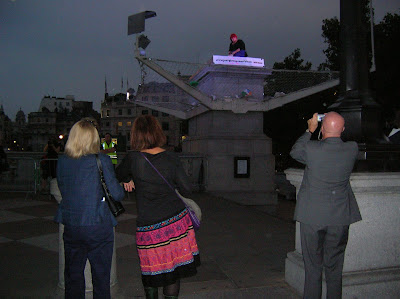 There was a game of chess, complete with erudite commentary, under way in the square: The Tournament, a centre piece of the London Design Festival. 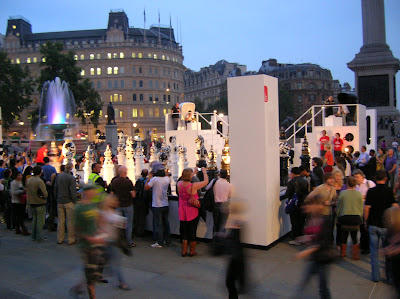 Midwife then requested a visit to Seven Dials, an area of London just north of Covent Garden. As you will realise from the map getting in to Seven Dials is easy, but if you are stood at the Seven Dials itself, with its different choice of directions to take, and one direction only being the one you want to take, and having lost your orientation from the road on which you arrived, all the roads look the same ..... 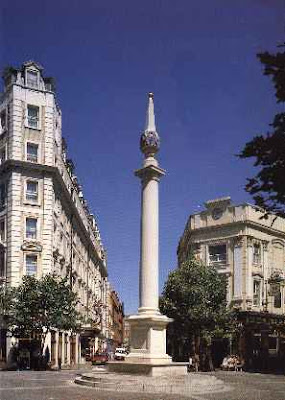 It was then on to 2 Greek Street, just off Soho Square: to a restaurant called The Gay Hussar. This had been the suggestion of English teacher (advisory), attracted by the restaurant's reputation as the haunt of sundry politicians whose caricature portraits decorate the walls. This was, of course, the ideal place to discuss the future of the world and such like matters. 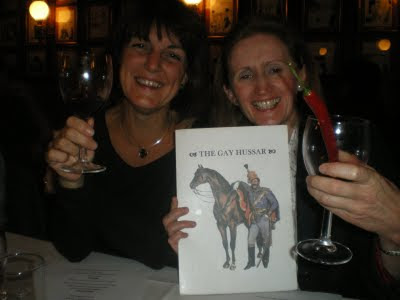 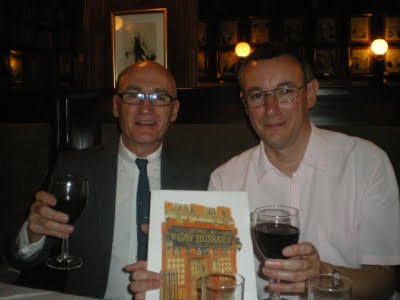 As a participant in a game show, you are given a choice of three doors to open. Behind two of the doors there is a goat (not the same one, presumably, two separate goats, each one behind a different door), and behind the third door there is a brand new car. You are given a choice of door to open, which you indicate to the show's host. The host then opens one of the doors that you have not chosen, and there is a goat behind it. At this point, would you change your choice of door to open?

Physics teacher began to think about the quantum mechanical wave functions of the two individual goats and the car, and that the original state before the opening of the first door by the show host was a superposition of the three overlapping wavefunctions. Opening the first door constituted a measurement of part of the system, leading to a partial collapse of the wavefunction, and the new situation being now represented by a superposition of the wavefunctions of the one remaining goat and the car ... at which point the effect of a glass and half of wine kicked in and he returned to his dessert without saying anything.

Then physics teacher (2) took hold of the book, and carefully set about studying the analysis of the probabilities of opening a door with the car behind it, calculated first with no doors having been opened and then with the one door having been opened. The argument was apparently that the chances of choosing the door with the car correctly first time were smaller than those of choosing it second time, after the one door had been opened, so you should change your choice of door.
At this point, physics teacher and physics teacher (2) both agreed that the situation of the second choice was a new one compared to the first choice, and so to compare a probability calculated on the basis of the first situation to one calculated for the second was nonsensical.
Neither midwife nor English teacher (advisory) offered a solution.
As I am sure the astute readers of this blog will realise, the key to finding the answer to the problem about the meaning of life contained in this conundrum is:

Should we really value to the car

more highly than we value the goat?
Posted by Joe at 19:10

It is somewhat comforting to read that in, say, twenty years, I could have the exact same sort of evenings as I have now, right down to the problem discussed (although the restaurant chosen was probably not of the main-meal-for-six-euros-kind).

For some reason only astronomy students get probability theory in their first year, leading to heated discussions about goats and cars during the breaks of lectures shared with the physicists.

(If I remember correctly, you should change, but not because they are two separate problems. If they were, it wouldn't matter whether you switched: both remaining doors have a probability of 0.5. But the door that's opened is guaranteed not to have the car. If you had 100 doors instead of 3, you picked one, and 98 other doors were opened, would you still think there's a 50/50 chance you got it right the first time? No - that's still 0.01. As it is still 1/3rd in the first case.)

Why doesn't English have a formal pronoun? Talking physics with a teacher using non-formal pronouns makes me uncomfortable :)

zero says
Actually there were two physics teachers!
Also, after a fine dinner the midwife, at least, didn't care what was behind the doors!
However, the Curious incident of the dog in the night- time is a gteat book.

I forgot - we do have a phrase to describe this. It is "second adolescence" - and I expect we will grow out of it eventually.

The (former) English didn't offer an opinion because he's read the 'answer'in the book. He still feels that since the chances were that he'd picked the wrong door (i.e. there was a goat behind it) then the goat would still be behind it after one door was opened.

So the questions would actually be whether there are screens between the doors, and is the goat afraid of loud noises?