Images of St James (3): the Moor-slayer 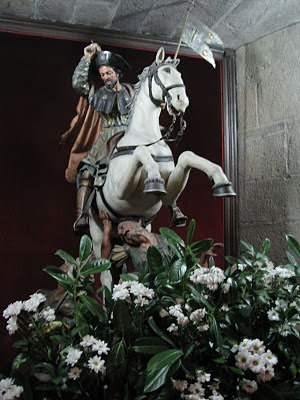 It is a very imposing image, represented in the Cathedral of Santiago de Compostela by this 18th Century statue. Though this example is relatively recent, the representation of St James as the "Moor-slayer" takes us back to a much earlier time in the history of Spain.
From the early years of the 8th Century, the major part of the Iberian peninsula was occupied by the Moors, a people who originated on the northern coasts of Africa and who occupied the peninsula. These peoples were Muslim in their religious belief, and so the political conquest also led to an adherence to the religion of Islam. Only in the most northern parts of Spain did the power of the Moors not hold sway. Small kingdoms held out, kingdoms whose religious faith was Christian. Over a period stretching from 718, when the Asturians successfully held out against the Moors at the battle of Covadonga, up to the end of the 15th century the "reconquest" took place. By the mid-13th century, most of the peninsula was no longer under the control of the Moors, an enclave around Granada being all that remained of their original conquest. The "reconquest" was not a consistent and organised campaign against the Moors, and only really took off in the 11th Century when the unity of the Moorish government broke down. The Christian kingdoms of the north then gained a greater unity and (at least according to the on-line library edition of the Encyclopaedia Britannica article) were affected by an anti-Muslim, crusading spirit.

The image of St James the Moor-slayer dates from the battle of Clavijo in 844, during the earlier times of the resistance to the Moorish conquest. At this battle, St James is said to have appeared on a white cloud and to have spurred the soldiers of the northern kingdoms (the Encyclopaedia Britannica refers to them as "Spanish soldiers", but I am not sure that "Spain" existed as a united concept at the time) on to victory against the Moors. In the traditional depiction, followed by the statue in the Cathedral at Santiago, St James is shown astride a white horse striking off the heads of Moorish soldiers beneath the hooves of his horse.

It is not difficult to see that this particular image of St James is much more challenging to contemporary sensitivities than the images of St James as apostle and as pilgrim. So how can we understand its place today?

A historian might ask whether or not it is an image which accurately represents the life of St James, the Apostle. Clearly, the answer to this question is "No, it is not an image that represents St James' life". A historian might also ask about the veracity of the appearance of St James at the battle of Clavijo, and seek to come to a judgement on the basis of the historical texts and traditions that relate the story. I do not know enough to be able to say what that judgement might be; but I would suggest that what is  represented by the received tradition is a seeking of the intercession of St James in support of the Spanish (but see above) soldiers and the effectiveness of that intercession. This image represents a received tradition of seeking the intercession of St James on behalf of Spain, the status of St James as the patron saint of Spain.

Even understood in this way, the underlying violence of the image continues to pose a challenge to today's world. This is in part a difficulty that arises from looking at an image rooted in the 9th century, which had its own outlook and context, through the very different outlook and context of the 21st century. In the 21st century - and this colours the way in which I have deliberately tried to present the history in what I have written above - we are used to separating the political dimension of life from a religious dimension. We are used, for example, to seeing the invasion of Iraq as an overthrowing of the regime of Sadam Hussein - a political phenomenon - and not as an attack on Muslims. Indeed, we would not see the invading forces as having been in any sense corporately "Christian" forces, though many of those taking part might have been Christians at an individual level. In the period from the 8th century to the 15th century, this separation of the political and the religious would not have been part of the outlook and context; quite the contrary. So  a "Christian" reconquest of Spain and an overthrow of a "Muslim" people is not distinguished from its political dimension, the gradual overcoming of the Moors by the predecessor kingdoms of the unified state of Spain. If the image of St James the Moor-slayer is perceived today exclusively as being an image of a Christian slayer of Muslims, this is to neglect the distinctly political aspect that is bound to that religious aspect in the original conception of the image.

A second aspect of the difference of outlook and context is that of seeking the intercession of a Christian saint in favour of a particular outcome of a political or worldly event. In an outlook where the political and religious are not distinguished, this is quite natural to the sensitivity of people of the times, and it is experienced as an intercession in favour of one religion over another. In the 21st century, with a distinguishing of the religious from the political, the person of religious faith will still pray for a particular outcome, but with a less direct sense of it being a prayer in favour of the politcal success of one religion over another. It is a prayer whose priority is in the spiritual realm, with the particular (political) outcome sought being at the service of this primacy of the spiritual. This can be experienced in the contemporary sense of St James as the patron saint of Spain, where the idea of protection and care is at the forefront rather than that of victory and conquest. One can perhaps see here an authentic development, in the sense of John Henry Newman, in the progress from the earlier understanding to the present day understanding.

It would be very easy to remove the challenge represented by the image of St James as the "Moor-slayer" by abolishing this image of the saint. What this post has tried to indicate, though, is that there is a much more fruitful road that can be taken by exploring the meaning of this image in its original 9th century context and in its contemporary 21st century context.
Posted by Joe at 23:23