Images of St James (2): the pilgrim

A second image of St James that is represented in the Cathedral at Santiago de Compostela is that of St James as a pilgrim. This image is represented most strongly in the seated statue of St James over the high altar, and in the statue of St James that can be found above the Holy Door through which pilgrims enter the Cathedral during a Holy Year. The statue above the High Altar is embraced by pilgrims during their visit to the Cathedral - reaching from behind the statue, pilgrims place their arms around the shoulders of the Apostle and make their prayers through his intercession. Above the Holy Door, St James is accompanied by his two disciples, Anastasius and Theodore. 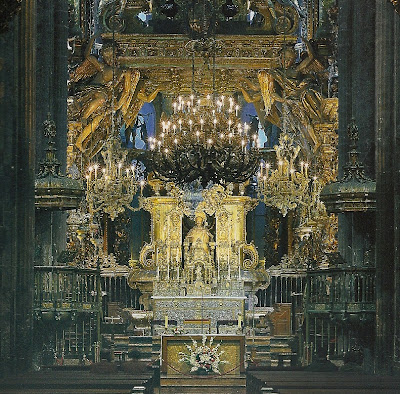 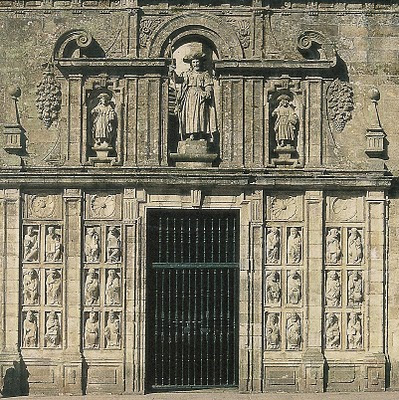 St James is portrayed in this image with the cape (decorated with the scallop shell) and the staff (on which hangs the gourd, or water carrier)﻿ that are the symbols of the pilgrim. He is also portrayed with a book, intended to represent St James the apostle and preacher of the Gospel.
The historian asks the question as to whether this image of St James accurately represents the facts of the life of St James. The answer to this question is that, clearly, it does not reflect the historical events of St James' life. Instead, it represents a particular devotion that the Christian faithful have held, and which has gained a permanent value because of its great age and fruitfulness. It represents St James as the patron saint and destination of the pilgrimage known as the "Camino de Santiago de Compostela". It represents the Christian faith at the heart of a Europe wide network of roads that, not just today but for centuries, have led to Santiago. In this second sense, it is an entirely authentic image, reflecting a historical and spiritual reality in the life of the Catholic Church and in the life of Europe. It represents a place and an action of pilgrimage in which the encounter with God can be celebrated with a particularly visible transparency.
Pope Benedict XVI, speaking at the welcome ceremony at the airport at Santiago de Compostela expressed the authentic content of the this image of St James:

I have come as a pilgrim in this Holy Year of Compostela and I bring in my heart the same love of Christ which led the Apostle Paul to embark upon his journeys, with a desire also to come to Spain (cf. Rom 15: 22-29). I wish to join the great host of men and women who down the centuries have come to Compostela from every corner of this peninsula, from throughout Europe and indeed the whole world, in order to kneel at the feet of Saint James and be transformed by the witness of his faith. They, at every step and filled with hope, created a pathway of culture, prayer, mercy and conversion, which took shape in churches and hospitals, in inns, bridges and monasteries. In this way, Spain and Europe developed a spiritual physiognomy marked indelibly by the Gospel.

During his visit to the Cathedral in Santiago, the Holy Father returned to the theme of the pilgrimage:


To go on pilgrimage is not simply to visit a place to admire its treasures of nature, art or history. To go on pilgrimage really means to step out of ourselves in order to encounter God where he has revealed himself, where his grace has shone with particular splendour and produced rich fruits of conversion and holiness among those who believe. Above all, Christians go on pilgrimage to the Holy Land, to the places associated with the Lord’s passion, death and resurrection. They go to Rome, the city of the martyrdom of Peter and Paul, and also to Compostela, which, associated with the memory of Saint James, has welcomed pilgrims from throughout the world who desire to strengthen their spirit with the Apostle’s witness of faith and love.

Some of the pilgrims to Santiago come without any conscious faith, drawn by the idea of the "Camino" in a way that does not include its religious dimension. I think that this reflects the universality of the place of Santiago de Compostela, to which Pope Benedict also referred during his visit to the city.
Posted by Joe at 08:48

By the end of August over 250 000 pilgrims received the Compostela - the copy of a 14th c certificate in Latin - confirming that they had walked the last 100km to Santiago. Many would have walked hundreds (or thiusands) of km to Santiago. Over 10 million pilgrims are expected to visit the Saint's tomb this Holy Year.