On Good Friday, I met up with my sister and her children for the final dress rehearsal of the Passion Play that was being staged in Trafalgar Square. A quite reasonable turn out, and a good number of families and children. I have not been able to find any coverage in the electronic media of the main performance at 3.15 pm, so don't know how many turned out for that.


The scene about ten minutes before the rehearsal started. In the second picture, the tomb can be seen at the right hand side. 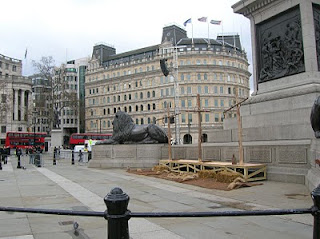 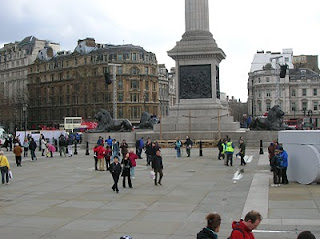 My attempt at an "arty" photograph of the crowd sitting on the steps in front of the National Gallery. 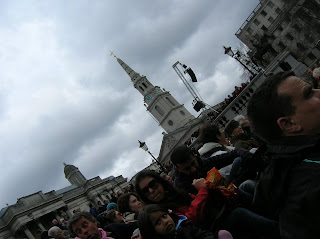 The Last Supper. This photograph also gives some idea of the people gathered along the sides of the stage area, as well as those on the steps and balustrades around the square. 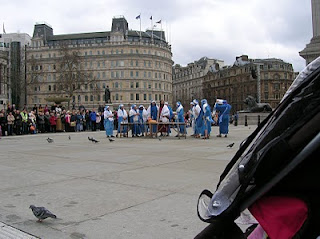 Pilate washes his hands of the whole affair. 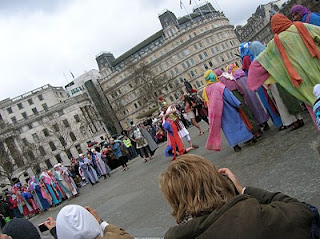 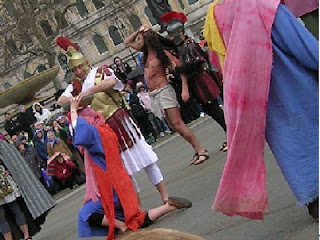 The Way of the Cross. 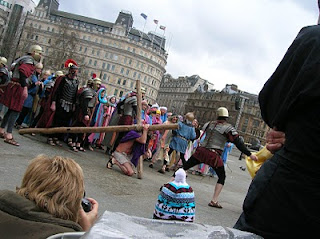 The crucifixion - by now it had been raining a little while and was quite wet! 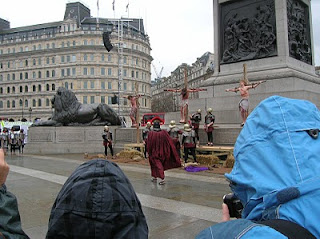 The weather did improve later in the day, and may well have been dry again for the main performance at 3.15pm.

The producer of this Passion Play was the owner of Wintershall Estate, who each summer produce a play on the Life of Christ. Their presentation in Trafalgar Square brought some of this production to London. This BBC News Magazine article tells something of the story behind the production. The introduction to the presentation was explicit in suggesting that the play was being staged to remind people what Good Friday was really about. Archbishop Vincent Nichols also gave a blessing to the crowd at the end of the play.

UPDATE: Some more photos, from the 3.15 pm performance I think, can be found here. Photos also give some idea of the size of the crowd.

UPDATE TO THE UPDATE: Bridges and Tangents has some further coverage here - and points out that, at the end of the play, Jesus (now risen from the dead) left the stage area passing through the crowd on the steps, up to the area in front of the National Gallery; and then headed off across Leicester Square:


And right at the end, after the Resurrection, Jesus stepped through the crowd in his white garments as the audience was applauding. He didn’t take a bow. He walked up towards the National Gallery, across the top of Leicester Square, and into the streets beyond. I followed him, while the post-production congratulations were taking place in the square behind us.

That image of Jesus turning the corner into Charing Cross Road is what made the whole play for me: the figure of Christ, walking into the madness of London; without the protection of a director, a cast, a script, an appreciative audience; fading into the blur of billboards and buses and taxis; an unknown man walking into the crowd…