A back of the envelope calculation: the answer is 608 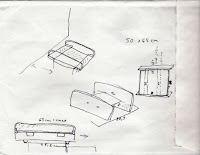 In the annals of the history of physics there is a famous "back of the envelope" ( well, scraps of paper anyway, while sat on a tree trunk during a Christmas holiday walk) calculation. This was undertaken by Lise Meitner and Otto Frisch, during a walk near Gothenburg in December 1938. Lise Meitner had just received news of an experiment that seemed to show the splitting of uranium atoms into two large-ish parts, at that time a completely unknown phenomenon. The calculation undertaken by Lise and Otto showed the theoretical possibility of this phenomenon, that we now talk of quite casually as "nuclear fission".

I did my own little calculation over the weekend.

Plus 32 hours multiplied by 5 to include the additional hours that go with the "Forty Hours" during the last five years = 608 hours.

If I take into account one or two extra events not included in the calculation, that puts 608 hours as a slightly conservative estimate of the number of hours of Eucharistic Adoration that I have facilitated in the parish since October 2003.
Posted by Joe at 11:14

My PhD-student babysitter only allowed calculations on the backs of envelopes and/or faulty graphs. :)