Zero and I enjoyed a day out in London for the New Year. The Central Line wasn't enjoying a good start to the year, so we made it in to London in time for 11 am Mass at the Church of the Immaculate Conception instead of our originally intended 10 am at St James' Spanish Place.
A bout of second adolescence set in as soon as we came out from Mass. The car involved here is a very nice one indeed - a Bentley. My other car, of course, is a Ford! 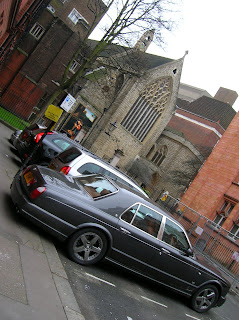 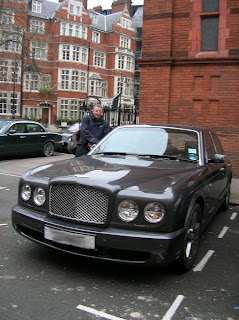 After some lunch, and getting lost around this part of London ... 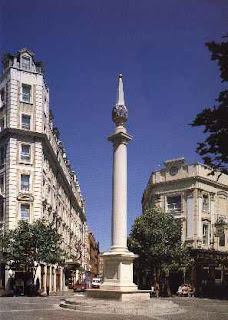 ... the Seven Dials area of Covent Garden .... "Seven Dials, Covent Garden – London's most fashionable shopping area", according to their website, and with quite a history if you have time to explore the site ... we finally found our way to the London Transport Museum. This is an excellent museum, with rather a lot squeezed into the space available.
I want to be a train driver when I grow up ... 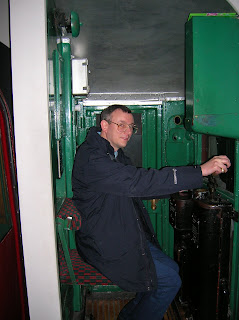 ... and Zero wants to be a bus conductor. 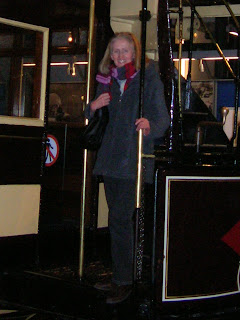 This is the example of the famous Routemaster bus in the exhibition. The no.11 is my favourite bus route - the full length of the route goes from Fulham in west London, via the Kings Road (very posh shops) to Victoria, whence to Parliament Square, Whitehall, the Strand, past St Paul's Cathedral and through the City of London to Liverpool Street Station. It can be a much more interesting ride back to Liverpool Street on the way home than using the Circle Line! 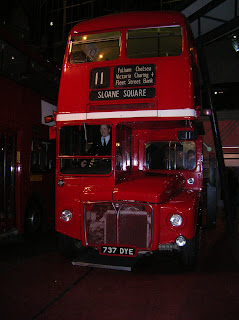 This bus would attract some very odd looks if it were to make its way along the A12 to Romford today. 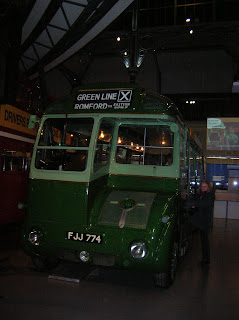 Someone is a dedicated follower of fashion ... 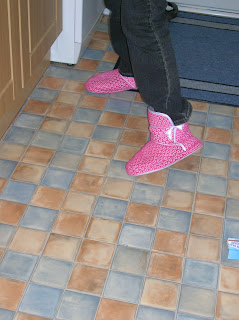 A piece in the Times newspaper for 1st January 2009 covered some of the new regulations that came into force yesterday. Amongst them is one about the use of flares during night time rescue work. This is now forbidden, having been overtaken by the use of night vision goggles by many of the agencies involved in such work. However, a sentence in the Times report clarified that the wearing of flared trousers by rescue crews was not covered by this ban on flares. 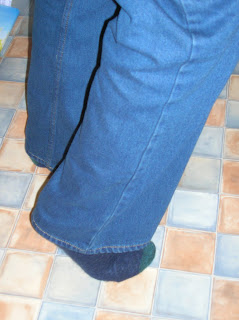 A happy and blessed new year to the readers of this blog.

Zero says
When you say you want to be a train driver "when you grow up" can you see that happening any time soon?!
I was most impressed with the Seven Dials area and have ordered Agatha Christie's "The Seven Dials Mystery" I didn't order "Towards Zero " by the same author!
Also ,Joe's jeans look alot more flared in reality!
It was lovely to go to Mass at the Farm St church and later to leave the busy streets and pop in to the quietness and semi-darkness of Covent garden's Corpus Christie church and visit the crib there.

Zero says
I have just followed your link to Seven Dials and found it very informative. Also, i hope the cold day out didn't leave your cold a full blown "man Flu".

I have just bought a book called City secrets London. Varied talented people suggest places to visit and things to do.The number 11 bus route has been suggested by someone-so you aren't alone!