A meme about saints

I have been tagged for this by la mamma. I am going to start responding now, but I think you will need to check back for updates to the post ... it is going to take me a while to answer every question!

I realise I am answering this in a slightly different way than the question intended, but I think it has to be my Mother. Though I only really found out after she had died. I did some research on her trade union activities in the 1940's, activities inspired by her membership of Young Christian Workers. When I read about how much Catholic leadership she had given to others at that time, and how it had stayed with those she knew then for all their lives, it made quite an impression. It gave me some insight into how, without seeming to do anything special to achieve it, she brought up three children who all still practice and are active in the life of the Church. [I will have to post on this at some point.] 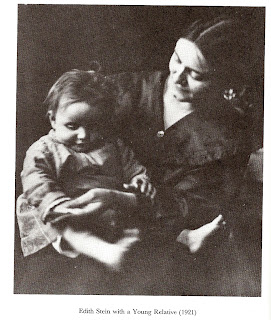 St Teresa Benedicta of the Cross (Edith Stein). She completely fascinates me, and I find her personality rather like my own (in human terms, that is .... I don't think I score on the "saint" bit like she did!). This is my favourite picture of Edith, with one of her nephews. [Where an individual saint has a particular charism, and expresses an aspect or aspects of the holiness of the whole Church, the Virgin Mary expresses the holiness of the Church in its completeness. The holiness of an individual "favourite saint" therefore has a Marian character to it - this is my way of saying "Mary and ...]


3. Patron saint for the year?

Will have to be St Bernadette of Lourdes, because of the 150th anniversay of the apparitions. She expresses both poverty and complete faithfulness in witnessing to the grace of the apparitions. I regularly quote her answer when she was asked, on the day she received Holy Communion for the first time, which pleased her most, the apparitions or receiving Jesus in Holy Communion. "I cannot say. They go together. I am very happy with both of them" [quotation from memory, so I know I haven't got it exactly right, but the idea is right].


4. Favourite book by a saint?


I have a problem here. In conversation with a friend, I once claimed to have read most of the books on my shelves. I duly pulled one off the shelves, with a plentiful number of slips of paper in it acting as book marks, to make the point. My friend then asked me what was on the first page (which I hadn't read) and what was on the last page (which I had also not read). I had used the book when I was studying up on something (hence the bookmarks) but I hadn't read it end to end. I was duly deemed to have "not read the book". As far as books by saints go, I have recently read a section of Edith Stein's "Finite and Eternal Being" - chapter VII n.5 - which is about angels. I have also read some of St Bernadette's accounts of the apparitions of the Virgin Mary at Lourdes, in "les ecrits de sainte Bernadette et sa voie spirituelle". Both more for reasons of study than of devotion, though one should not perhaps oppose study to devotion.

5. Saint book you are reading now?
See 4 above! I find myself dipping into different books as needed ...

7. Favourite biography/autobiography of a saint?
Jean-Jacques Antier's life of Charles de Foucauld, published in English translation by Ignatius Press. I found this a very exciting book. It tells the story of de Foucauld's last day alive - but at each point in the day then takes you back to tell the story of his earlier life. As you progress through the chapters, each of which begins by describing the next part of de Foucauld's last day, the tension builds quite tangibly. Extremely well written.

Clara Lejeune's biography of her father, Jerome Lejeune, called "Life is a Blessing" comes second. I am sure the cause for Jerome Lejeune's canonisation is already opened or soon will be.

8. Favourite novel/book by a saint?
Stumped completely by this one.

9. Saints (besides your favourite's) you'd want to meet
St Thomas More, because my trade union activity gives me some part in political life, and he is a patron saint for those in public life. Meeting St Robert Bellarmine might also be rather like meeting Pope Benedict XVI - some years ago now, I had occasion to describe Bellarmine as being the "Cardinal Ratzinger of his day". By which I meant that they are both people of deep faith, powerful intellect and whose lives demonstrate an encounter between their faith and contemporary culture. Nearly forgot St Joseph ... but I am not sure I have any idea what it would be like to meet him.
Posted by Joe at 20:22

Even if I have read a book, the chances of me remembering first and last pages are practically nil ! Occasionally I find myself reading a book, thinking it's the first time, and then I find a comment scrawled on a slip of paper and I realise it's at least a second reading!