All the Cathedrals (8): Worcester Cathedral

Zero and I visited Worcester at the February half term, so we were there for Ash Wednesday. We weren't able to make Mass on the day, and so frequented the Cathedral for their evening service, with imposition of ashes. The crosses on our foreheads were sufficiently dramatic to be noticed as we walked out for our supper afterwards!

Worcester Cathedral shares a narrative common to a number of English cathedrals: first foundation in Anglo-Saxon times; a Benedictine monastic phase brought to an end by the Henry VIII's dissolution of the monastery and establishing of a Cathedral and chapter; significant damage as a result of the attention of the Parliamentary side during the Civil War (though the extent of this is hardly apparent today, with the only visible defacing in the Hall); and subsequent measures of restoration. The names of St Oswald and St Wulfstan are associated with the building of the Cathedral, the latter continuing to hold the see after the Norman conquest. A summary history of the building can be found here.

The restored Norman crypt is very striking, in part because of its contrast to the construction of the later Cathedral above it. 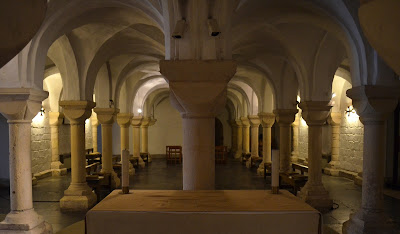 King John, of Magna Carta fame, had extensive connections with Worcester and his tomb lies in the choir of the Cathedral, before the high altar. (The tomb would appear to have escaped the attention of the Parliamentarians at the time of the Civil War.)

There is also a chantry chapel to Prince Arthur, oldest brother of the future Henry VIII and first wife of Catherine of Aragon, who died before he could succeed to the throne. 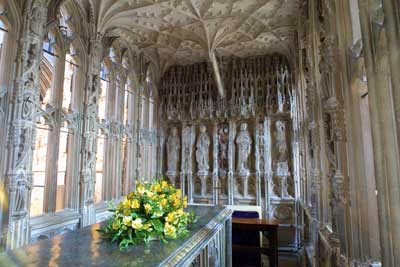 A striking feature for an Anglican Cathedral is the window dedicated to Sir Edward Elgar. Though Elgar was a Catholic, he had a strong musical link to Worcester Cathedral and to the Three Choirs Festival. The window represents Elgar's Dream of Gerontius, a strikingly Catholic theme. The Cathedral is just a stone's throw from the modern shop that now occupies the site of the Elgar's family music shop.

Much of the stained glass in the Cathedral dates from the Victorian restoration, with the West window depicting the story of the creation while the East window tells the story of Jesus life, death and resurrection. A repair of the West window was still underway at the time of our visit, with scaffolding in place on the exterior hiding the otherwise distinctive view from the river. Many of the fittings that we see today date from this Victorian restoration. The reredos of the high altar by Sir George Gilbert Scott, for example, represents Christ enthroned with the four Evangelists. The effect is to render almost imperceptible to the contemporary visitor the damage done during the Civil War - it is only in the School Hall that a defaced image remains visible. The Victorian restoration also replaced the majority of the external stone work, which disguises the earlier history of the Church as the visitor approaches from the outside. 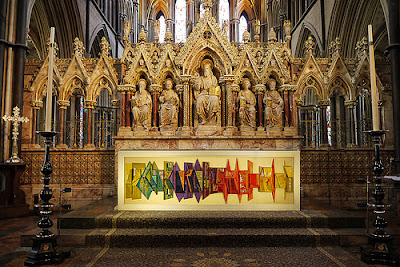 A much more recent restoration programme has taken action to preserve both the appearance and structure of the Cathedral.
There is a cloister with memorials in the glass windows. Access to the river can be gained by passing through the grounds and down a walk way. Set in the wall are stones that mark the water levels reached by floods of the Severn. 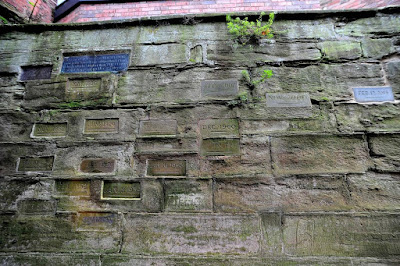 As a city, Worcester suffers from a bit of a split personality. The High Street is occupied with many modern buildings that have replaced some of the older buildings, such as the music shop owned by Edward Elgar's parents. Friar Street and New Street, however, have preserved a number of their older buildings, including the public house from which Charles I is said to have made his escape after the second Battle of Worcester. A number of the businesses in these streets occupy premises that retain features of historic interest.
Posted by Joe at 20:25

Labels: all the cathedrals