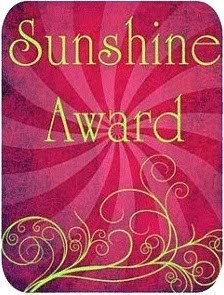 A little while ago, Jackie nominated me for the above award (apologies for delay in acknowledging this). I did appreciate that Jackie's list of ten nominees included blogs that I would recognise as being more thoughtful in nature - and it was pleasing to be in their company. I am not going to nominate my ten further nominees, beyond this observation.

I will do the other part of the deal: herewith ten things about myself.

1. I am not anonymous - Joe is my real name.
2. I am a Siamese twin [if you recognise the acronym SEATO, and use a bit of imagination, you will be able to work that one out! There is a family story of my father once saying this when we visited a GP for innoculations - he will have said it with a face and expression totally deadpan - and causing great excitement in the surgery].
3. I was recently thanked for bringing the light back into a friend's life [= I can still replace the fuse wire in a blown cartridge fuse].
4. The years are apparently treating me very well [= I met someone recently I had not seen for about 30 years, and he observed that my hair was lasting rather better than his own; I am usually disappointed if people don't take at least 10 years off my actual age].
5. Perhaps the highlight of my ecclesial experience was reading the first reading at the Statio Orbis celebration at the conclusion of the 2008 International Eucharistic Congress in Quebec.
6. I can usually come up with an unusual place to visit during a holiday [eg here and here during a visit to Prague].
7. My favourite saint is Edith Stein - I have visited the Church where she was baptised and seen the font in which she was baptised; her room at the Dominican Convent in Speyer (more than once); the Cathedral in Speyer where she went to Mass (and the bridge linking the Cathedral and the Convent, on which there is a statue of Edith); the Carmel in Cologne (the convent Edith knew was destroyed in an air raid); and, more recently, walked along the railway platform at Birkenau where she spent the last moments of her life (my companion at the time very kindly left me alone and went on ahead so I could walk with Edith by myself). I would like to visit Echt, and Wroclaw, to complete my pilgrimage to places associated with her. Perhaps the second highlight of my ecclesial experience was being in St Peter's Square for Edith's canonisation.
8. My day job is divided between teaching Physics  in a school in East London and a role as a Branch Secretary for one of the teaching unions.
9. I was once a parish MC - and have since suffered from the chronic disease that former MC's have (Liturgical fussiness).
10. The blogpost I have been most pleased with is probably this one: If you knew SUSY. Because if you scroll quite a way down this interview transcript (with the author who wrote the Physics World article I was commenting on).... you will find a blogger being referred to who can't really be anyone else but me. The visits to my post from the University of Maryland over the years suggest that it did prompt a discussion there.


And his implication is that indeed this is something for theologians to contemplate. You know, that was, again, for me a stunning assertion and it still has yet to be fully studied. But it probably will not be studied by physicists (laugh).

H/T to William Ockham, who pointed out the connection to me.
Posted by Joe at 08:30