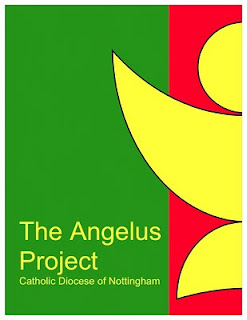 Since it is Bishop Malcolm McMahon OP who leads for the Bishops Conference on education, it should perhaps not be a surprise that his diocese has a well prepared initiative to mark the Year of Catholic Education. It is called The Angelus Project.

It is an encouraging project in two respects. It does, in the first place, express something that is specifically religious in Catholic education. In the second place, it reflects the overall theme that has been taken for the Year of Catholic Education: "I have come that they may have life to the full". The five listed themes - Sainthood, Service, Vocation, Communication, and Prayer - seem to embrace the idea of the common good in a way that includes the religious (see my earlier post on the Year of Catholic Education).

The project takes its name from the prayer of the Angelus, which it encourages schools to use with their pupils. Others in the diocese are also being encouraged to pray the Angelus, as close as possible to 12 noon each day. Among the resources on the Angelus Project page, I liked:

- the adapted version of the Angelus prayer for use with very young children, which I thought preserved the integrity of the prayer whilst presenting it in an age suitable way

- the Angelus hymn, which is simple but attractive to sing (listen to the .mp3 here) and the words of which are profoundly evangelising.

This encouragement of the praying of the Angelus can be evaluated within the framework of the Church's understanding of its mission of evangelisation. In that context, it can act as "primary proclamation" of core Christian teaching - the coming of Jesus Christ, God made man, to live among us and to die for us. This is explicit in the words of the Angelus hymn, and attention could usefully be drawn to it from time to time as the hymn is used in schools. If a contemporary arrangement of the Regina Caeli is used during Eastertide, then the proclamation of the Resurrection will be added to this proclamation of the incarnation and death of Christ. The regular use of the prayer will also encourage in pupils the element of response to that primary proclamation - something that is, again, explicit in the words of the Angelus hymn when it speaks of our praising God morning, noon and evening.

My two final thoughts are that the Angelus Project takes a devotion that could be described by the word "traditional" and presents it in a very contemporary manner. And, in undertaking an exercise in "primary proclamation", it does so in the company of the Virgin Mary thereby expressing the Marian-ecclesial character of evangelisation. I like it!
Posted by Joe at 15:32